I needed a backdrop for a future project I am doing for part of the battle of Isandlwana. I considered painting the mountain of Isandlwana on a sheet of board but decided in the end to make it out of some polystyrene that I had lying around.

As my table is only 7 x 5 foot and the backdrop would be running along the length of the table I didn't want it coming out to far into the table and taking up valuable playing area. The piece of polystyrene also dictated how big the backdrop was going to be and by scale it turned out to be a tiny little hill.


The measurements for the backdrop are 4 foot long in two 2 foot sections, 9.5 inches high (could have done with being a little taller but it was all the polystyrene I had at the time) and the base was only 4 inches deep. I didn't want the base coming out to far as the table was only 5 foot wide.

It was constructed using polystyrene shaped roughly to the size I wanted, wooden chips/bark from the garden centre was then glued onto the surface and when dried, the gaps were filled in with tile grout. I then covered with PVA glue in appropriate places and sprinkled small stones and sand onto this. When dried paint and flock to match table surface.


In the last picture you can see how narrow the depth of the base is with the side on shot.
I will need to purchase quite a few tents and wagons at Salute in April to give it the right look of the British camp at Isandlwana. I have also finished making the donga for this project which I will show in a future post.

Here is a comparison shot of a Minden Miniatures and Perry Miniatures figure.
As you can see, the Minden figure is slightly slimmer than the Perry figure but I think work well enough as individual figures or to keep them as separate units. Having a closer look I am not sure if they would work as a mixed unit with Perry. As I just have the civilian packs they will work fine for me. 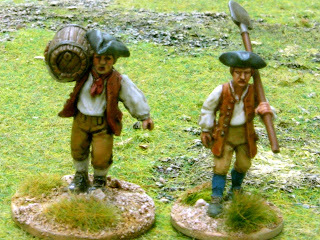 The following pictures are of a couple of Perry Miniatures plastic buildings along with Minden Miniatures civilians. The horse and cart is by Front Rank and the fencing is scratch built by myself, along with the rest of the terrain.
I have used the rest of the plastic fencing that comes with the building to make a small allotment type base.
The Minden figures come from their SYW range but are ideal for AWI or FIW. These are really lovely sculpts with no flash to clean and are a joy to paint. They are also a good match for Perry figures and with hindsight I should of done a comparison shot, this will have to wait now for a later post.

These figures come with open hands and a selection of farm tools to arm them with. I replaced one of these with a musket and have placed the unused broom on the porch of the white building. The groom holding the horse I have placed on a separate base, as I thought the Blacksmith and horse, at a pinch could be used for other periods.

Email ThisBlogThis!Share to TwitterShare to FacebookShare to Pinterest
Labels: AWI

Here are the Natal Mounted Police and Carbineers I promised last week. Once again these are from the excellent Empress Miniatures Zulu war range. 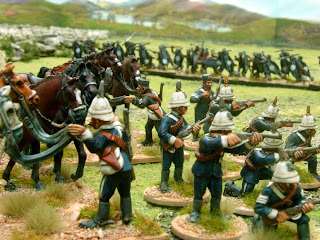 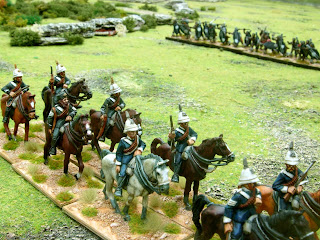 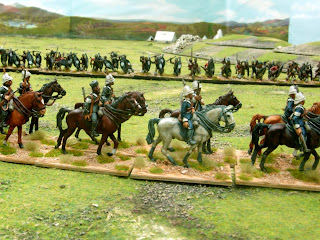 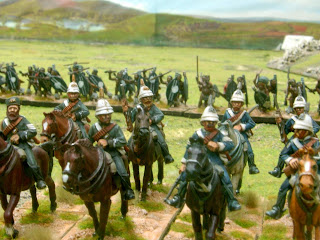 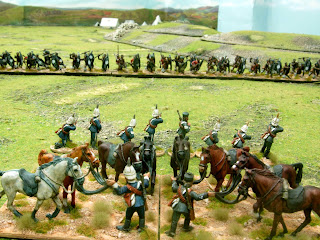 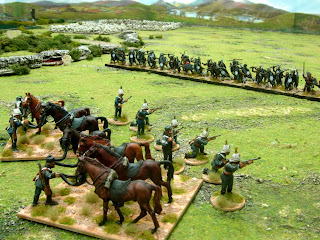 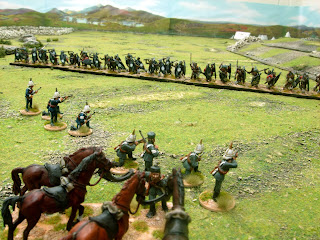 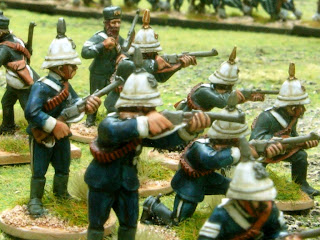 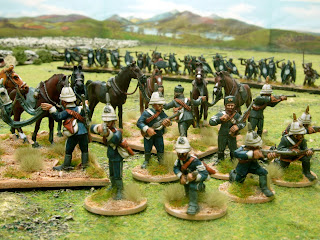 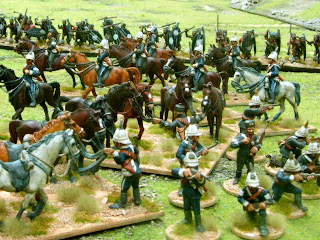 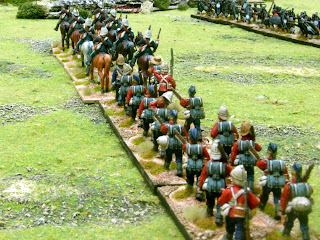