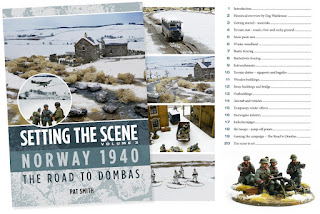 Apologies for lack of blog posts lately, but I have been busy with volume 3, which is now at the graphic design stage with Steve Lampon.

Setting the Scene Volume 3 ‘The Road to Dombås’
Setting the Scene, Volume 3 is set in April 1940 during the invasion of Norway. This volume follows the same format as the previous two books; as a step-by-step guide for making terrain and painting figures. Volume 1 focused on a winter setting in the Ardennes during WWII, whilst Volume 2 has a Mediterranean theme and has a dual use for WWII Italy and Sicily, and the Napoleonic Peninsula War.
You will find some similarities between this volume and Volume 1 in that they are both set in a winter landscape. The inspiration for this volume came about when I read an article penned by David Hunter entitled ‘The Road to Dombås, 1940’, which was published in issue 100 of the Wargames, Soldiers and Strategy magazine.
David put together a seven game, three map campaign, designed to be used with the WWII platoon level rule system, Chain of Command. There was also guidance for converting the campaign to Bolt Action written by Guy Bowers.
The entire article and campaign for both systems is reproduced in the book with the kind permission of David Hunter and Karwansaray Publishers.
We also have the help of archivist Dag Wardenear from Norway, who has a deep and patriotic passion for the history of his native homeland. Dag has translated into English several books, originally written in Norwegian, about the invasion of Norway during WWII. He has kindly contributed to this volume by providing a brief historical overview of the events that took place in April 1940.
Two chapters (Snow paste mix and winterising existing scenery) are repeats from Volume 1 for the benefit of new readers, but the remaining chapters are entirely new with different techniques and ideas.
If we generate enough interest, this will hopefully allow us to reprint Volume 1 (which is out of print with 50-60 people on a waiting list), and Volume 2 (which is nearly out of print).

For more information or if you would like to register interest in this volume, please leave a comment on Steve's webpage.
http://www.stevenlampon.co.uk/dombas/ 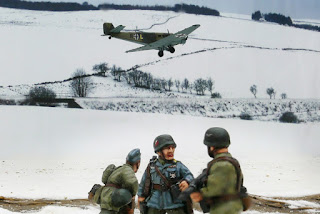 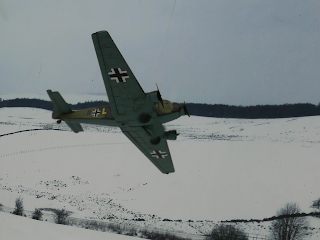 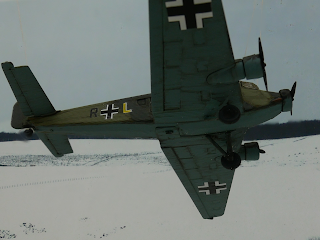