Chain of Command and home from holiday. 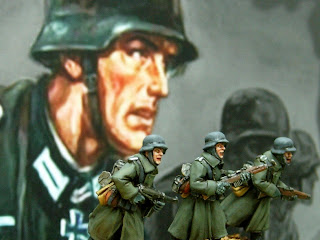 I recently returned home from my two weeks family holiday in Austria and was excited to find the new 'Chain of Command' WW2 rule set in amongst the post. I ordered the bundle which included the book, PDF and all the markers that go with the set and am very pleased with the quality of it all. 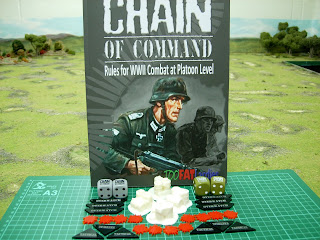 John Warren is coming over to my place next Friday for a game and so I thought it would be ideal to give these a go. I have played them once before at Salute when Richard and Nick of the 'Too Fat Lardies' fame were umpiring the game but I will have to do some reading of the rules before then as I am not going to have their expertise this time. Having said that, both John and myself have gamed with some of the other TFL rule sets and they are very user friendly, so I am sure we will cope.

The only problem is, I need to paint up some more German's to give myself enough figures for an Ad hoc platoon for the game, so I will need to get my skates on.

I have just finished these Artizan Miniature figures and have been experimenting with the camo. 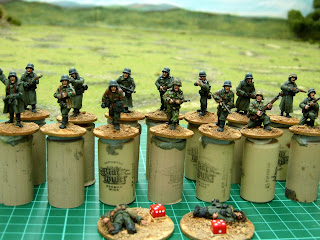 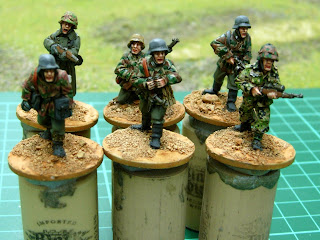 I also need to paint up a third section before Friday and as I have these German Para's already pre-based and primed, it will save me time if I paint these. (I did say it was going to be an Ad hoc platoon.) 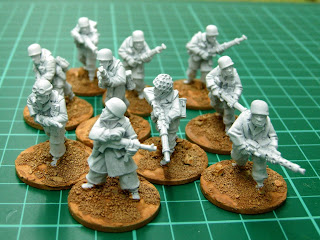 I have plenty of American Para's for this game and hopefully at some point in the future I will have vehicles and the correct unmixed platoons along with additional support.

On holiday, we did a fair bit of walking through woods in the Alps and I noticed the floor was covered in a type of moss/lichen which I thought might be ideal for the wargames table as it was very dry and had no little insects in amongst it. 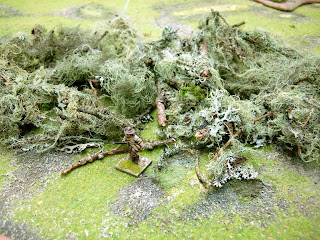 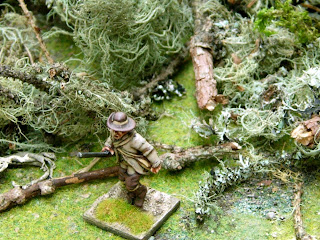 I have put a 28mm Perry's figure next to it for scale and the picture below shows it to the right of the commercial product that most of us use. 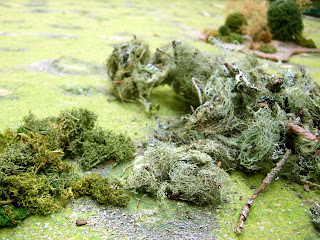 As long as it doesn't rot down to quickly it should be fine and it is free, so I will have a go at making some woodland bases with this in the future.

I will try and catch up with some of your blogs over the next few days but I also need to get those Germans painted, varnished and the bases finished before Friday. 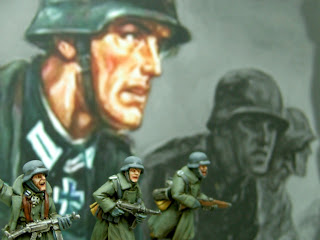 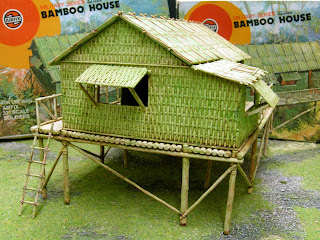 A new scale and a new period ( as in theatre) and it all started when I was up in the loft and came across an old plastic Airfix kit of a 1/32 scale Bamboo House that I had as a young boy, 40 years ago. The kit was issued in 1973 and is now out of production and apparently quite rare. Having said that, I have been watching ebay and managed to buy (although at an over the top price) a second set recently.  I had given the Airfix plastic figures away to my nephews many years ago and kept hold of the building and I am glad I did as it is a wonderful piece of kit.

With the 'Too Fat Lardies' Chain of Command rule set soon to be released, I have been updating my existing 28mm WW2 collections in preparation for this. As they are for Western Europe and in 28mm I thought a platoon of Japanese and American infantry in a bigger scale and fighting in the Far East would be different and fun to do. I don't think the Chain of Command rules cover the Japanese but hopefully they will bring out lists in the future or if not I will have a tinker with them myself.

The decision I had to make was would I collect and paint the Airfix 1/32 (54mm) scale plastic soldiers for this collection or go with the slightly smaller 1/35 (51.4mm) scale plastic figures kits.
Having checked out on the web what was available and the costs, I decided to go with the 1/35 scale kits. There are some wonderful kits out there especially for Western Europe, that I may be tempted to cover that in this scale at some point in the future as well. Obviously you have to assemble and glue  the figures but they are so good I think it is worth the effort. As for cost, you can pick these figures up for not much more than the cost of a 28mm metal figure. You would have to consider collecting suitable terrain for this scale but with the Pacific Theatre you could probably get away with any jungle terrain you have for 28mm. I plan on scratch building a couple of bamboo huts to go with my two Airfix buildings for a small village setting in the jungle for my platoons to fight over.

Anyway, enough of my ramblings and let me show you what I have so far........ 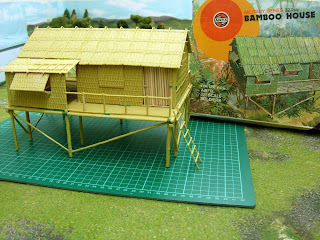 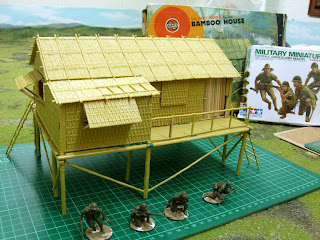 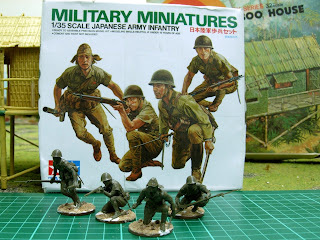 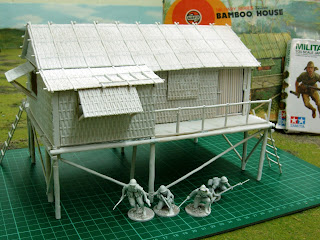 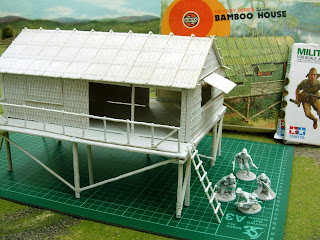 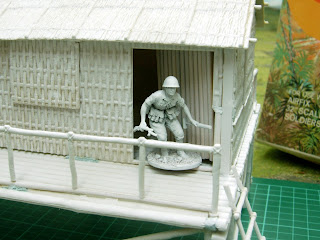 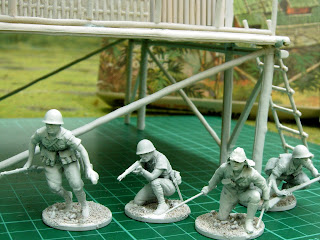 As you can see in the above pictures, that I had to make a few repairs and make a new door for the building. 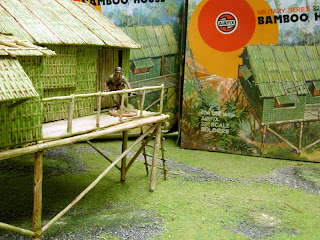 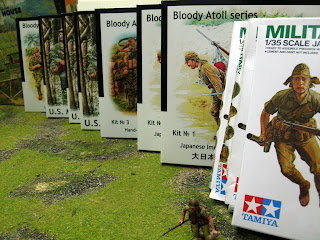 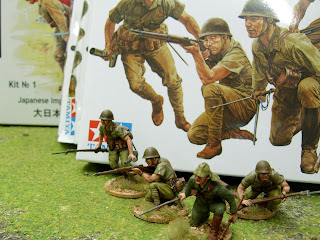 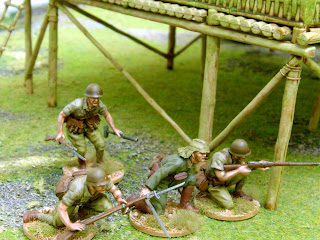 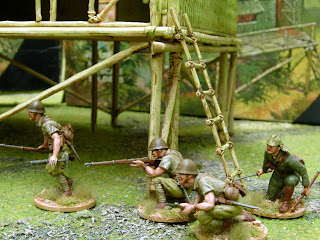 In this picture you can see the difference in scale between the 1/35 scale figure and a 28mm figure from Artizan Miniatures. 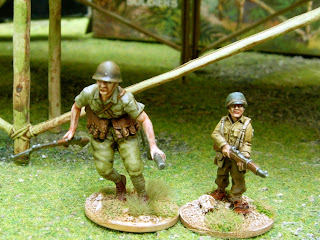 I would like to finish this post off by thanking Simon Walker for buying my complete Zulu War collection. You will see more posts on this blog relating to the Zulu War, as Simon wants me to paint additional figures for the collection.

Apologies for lack of feedback on your blogs chaps but I have just returned from a long weekend back down in Wales and have only just managed to get this done in time before retiring for the day.