I have made up some 'ammunition runners' to use when the British start getting low on ammo at the battle of Isandlwana. As the defenders deployed away from the main camp these figures will be used to run back and forwards trying to keep their units from running out of ammo.
Four of the figures are from 'Redoubt Enterprises' and the other two are from 'Empress Miniatures' character pack. The bases are from 'Warbases' 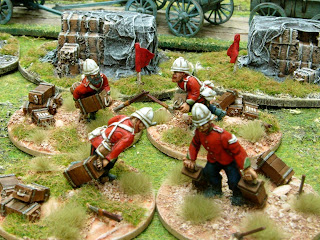 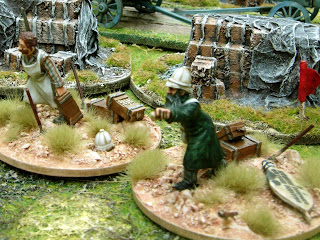 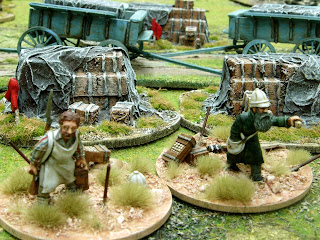 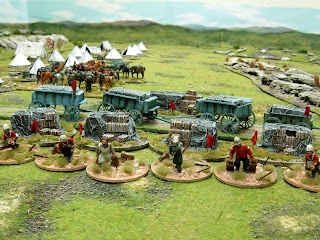 The shirt on the cook (Empress Miniatures) I copyied from Dave D at 'One Man and His Brushes' blog.

I plan on using markers to signify my Zulu's 'going to ground' when they come under fire. I will place one of these markers in front of a unit that has come under heavy fire and failed its morale test. 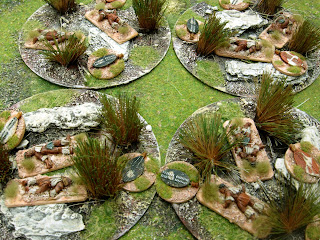 The following pictures show the materials that I used for these. 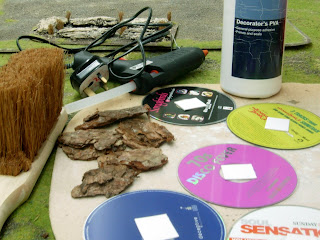 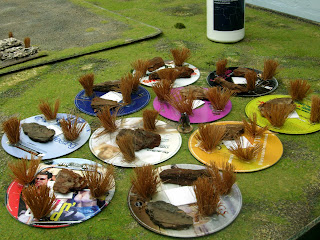 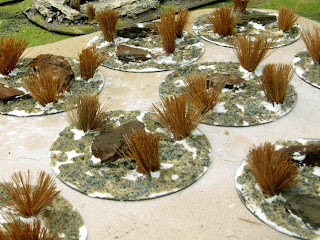 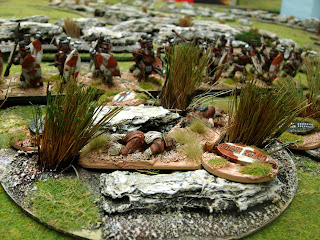 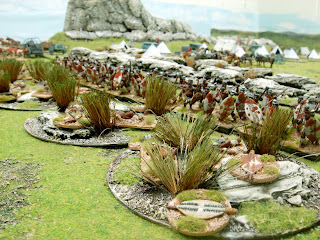 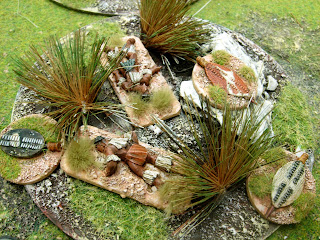 I originally planned to use a box of plastic Warlord Zulu's to make my markers. I was going to convert the figures so that they would be crouching down behind cover. In the end I decided against this, as I like my terrain to be as versatile as possible. By placing a couple of casualty figures on the marker works for me and I get to use the marker as just a general piece of rough ground and I can also use it for other periods. 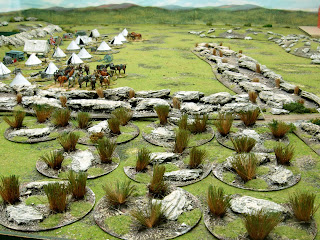 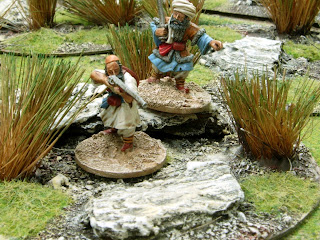 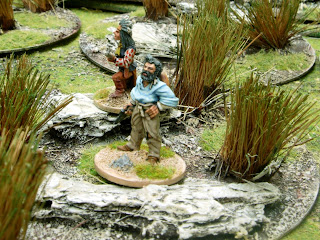 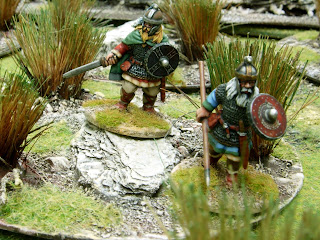 Well, I am back from my holidays in Austria and one of the highlights for me was visiting the location of the 11th Century Castle, Burg Hohenwerfen, in Werfen 'Where Eagles Dare' was filmed. It was actually filmed in several different parts of Austria and the film studios back in Blighty. 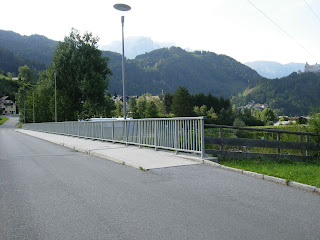 When you get off at the quiet little train Station in Werfen, (we were the only ones) there is a small bridge in front of you which crosses the river and ahead is the village of Werfen, whilst to your right in the distance is a truly magnificent site of that famous castle that we have all seen every time we watch the film.( It made me feel like I had been here many times before even though it was my first time.)
The bridge looks like the location where Burton and Eastwood are walking across the bridge and get stopped and asked for their passes by the German sentry?????? (There is no official guide for the making of the film at the location just the castle itself, which is a bit of a shame.)
The village main street I believe was used for some scenes in the film but the guesthouse was from a different village. There is no famous cable car leading up to the castle as this was also filmed at a different location. 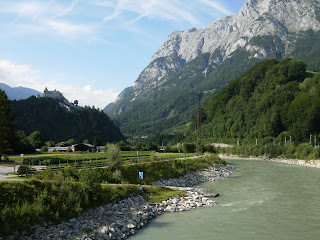 This picture is taken from the bridge and you can see the castle in the distance with the mountains to its right, where you have Burton and Eastwood looking down from the mountains through their binoculars. 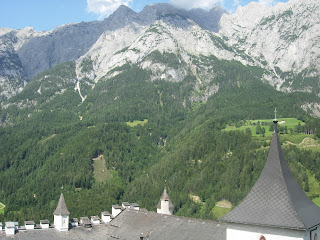 The photo above shows another view of the same mountains from inside the castle.

The next picture shows the court yard inside the castle. In the film you see the garrison line up waiting for the helicopter to arrive and land in the court yard. 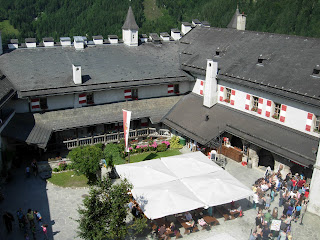 I should have done my research before visiting as I was trying to work out whilst standing in the court yard where the radio room was in the film????? I have ordered the DVD of the film and the novel by Alistair Maclean from Amazon and will be viewing the scenes in a lot more detail having visited. 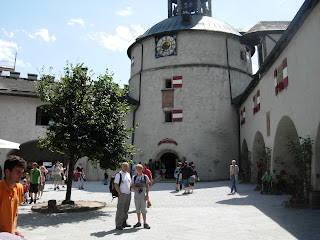 They do a very good guided tour of the medieval castle and its history which I enjoyed but apart from a film clip on a loop in one of the rooms of the film 'WED' there is nothing to help with trying to find out where all those famous scenes took place, IE climbing up the outside of the castle on that rope, which window and room was used????? This would make a great little tour package visiting the different villages that were used for filming, the cable car location, a guided tour of the castle purely for the 'WED' film and the airfield at the end of the film. 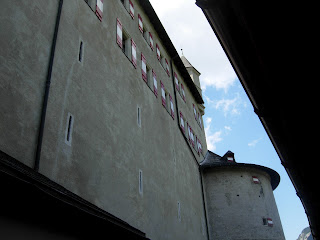 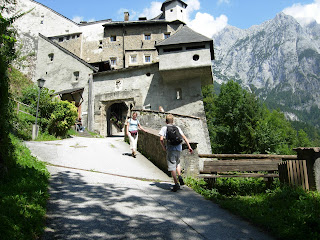 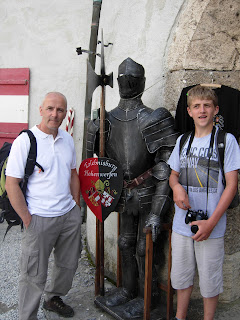 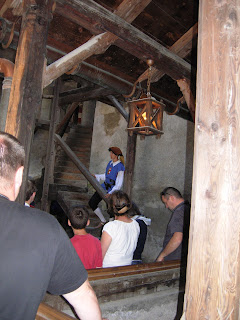 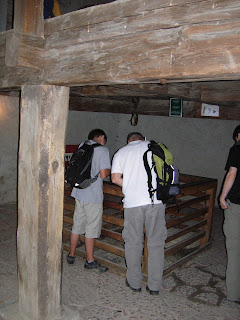 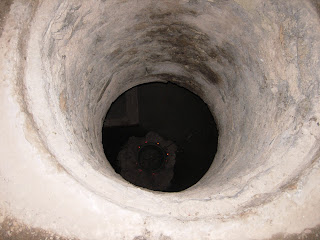 The last two pictures show the entrance to the dungeons. You would have been thrown through this hole and if you managed to survive your 9 metre drop, that is where you would have stayed in darkness until they decided to lower a rope on a winch to fetch you out. The longest surviving prisoner apparently lasted seven years but was mad and blind by the end of it.