Durnford had ridden out of camp at the head of his cavalry and had ordered Captain Russell's rocket battery to follow behind with an escort of NNC. The rockets were loaded on pack-mules but the ground was difficult, seemed with dongas and strewn with boulders and Durnford's men had inevitably drawn ahead, leaving Russell and his escort alone on the plain. When they were about a mile and a half from the camp and about two miles behind Durnford's men, having just passed the Conical Koppie, they came across some vedettes who advised Russell to withdraw as there was a large number of Zulus moving in this direction. Russell however decided to press on, in the best military tradition. 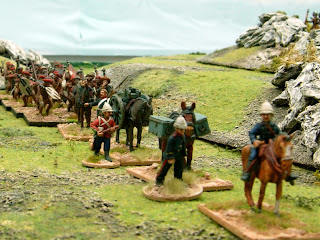 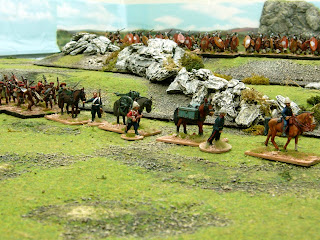 Russell caught sight of warriors appearing on the crest above him and turned and shouted "Action Front!" 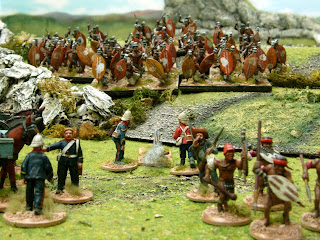 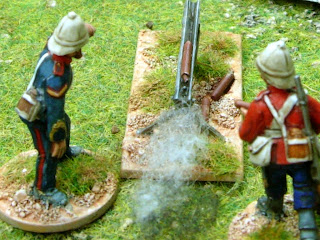 The battery only had time to fire one rocket, which passed over the heads of the warriors, before Russell's command was over-whelmed.

This was happening probably about the same time that Cavaye's Company first came into action.

Durnford meanwhile, had ridden out about four miles from the camp when he received a message from some Carbineers, that they were being surrounded. Durnford ordered his men to extend and when the Zulus got to within 400yds they fired and retired alternately, slowing the Zulu advance.

Far away on the left, Essex now thought things looked rather serious, with the enormous masses facing them. "The enemy's fire had hitherto been wild and ineffective, now, however, a few casualties began to occur in our lines". The band of the 1/24th doubled as stretcher bearers.

They were out with the companies some ten minutes when they were ordered by Surgeon Major Shepherd to go to the hospital tents, as Shepherd believed there would be too many wounded to attend to.

Pope's men had been sent out initially over a mile from the camp. This position was obviously too extended in the face of the mass attack which was now developing, and Pope's men fell back closer to Wardell, who had secured himself on a rocky rise.

In any case the line was still spread perilously thin. Beyond Lonsdale's NNC, to the British right, the flank was wide open, there was nothing except the shattered remnants of the rocket battery, and Durnford's men retreating steadily across the plain.

Pulleine had no reserve available to him, beyond Captain Krohn's NNC company still drawn up in front of the tents and a crowd of camp casuals - servants, cooks, grooms and men with no other duties - who had taken up a position in front of the camp and were blazing away at the Zulus in the distance.

The artillery threw about 25 shots from different parts of the field during the battle. For the most part the guns fired on the Zulus facing to the North, but at one point Major Smith took one gun off a little distance to the right to fire at the Zulus attack developing there. 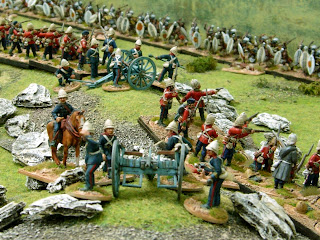 Shortly after Mostyn and Cavaye's companies had retreated to the bottom of the hill, Essex observed that they were now getting short of ammunition, so he went to the camp to bring up a fresh supply loaded on a mule cart.

While the line was holding the Zulus to the North at bay, however, the increasing numbers of warriors swinging South across the plain were posing a serious threat to the British right. To the right of the guns there were only Wardell and Pope to meet this attack, along with Lonsdale's NNC company.

Due to the right flank being very open, Captain Gardner rounded up "30 or 40" Mounted men and asked Pulleine for permission to take them out to the right. These were the Volunteers and Mounted Infantry under Captain Bradstreet who went out and lined the spruit running across the front of the camp.

Bradstreet had not been in position long when Durnford's men, still retiring across the plain, fell in beside them.

Durnford moving up and down the line continually, encouraging his men.

At about this time Pope's company left its original position and, passing behind Lonsdale's NNC took up a new position between the rocky ridge and Durnford's men in the donga.

Unfortunately before they had time to complete this manoeuvre, Durnford's men fell back again and Pope's company was now very exposed to attacks from his right. 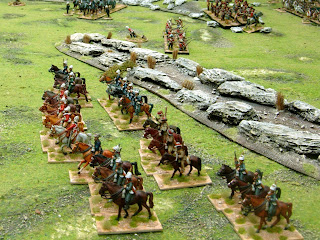 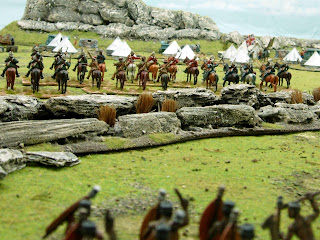 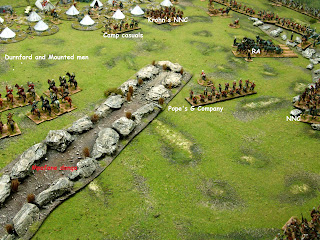 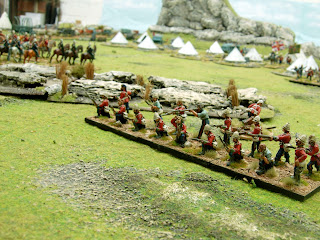 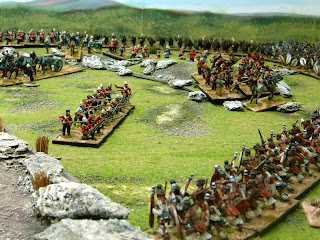 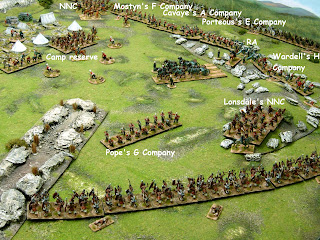 Durnford's men held the donga for perhaps 20 minutes or half an hour but the Zulu left horn sweeping around to Durnford's right, had forced them to fall back.

Durnford's retreat must have horrified Colonel Pulleine, since it left the British right wide open. Both Essex and Gardner rode over to find out what had gone wrong. Durnford's position had become to exposed to hold any longer. 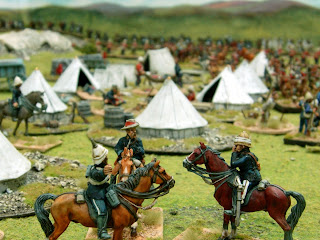