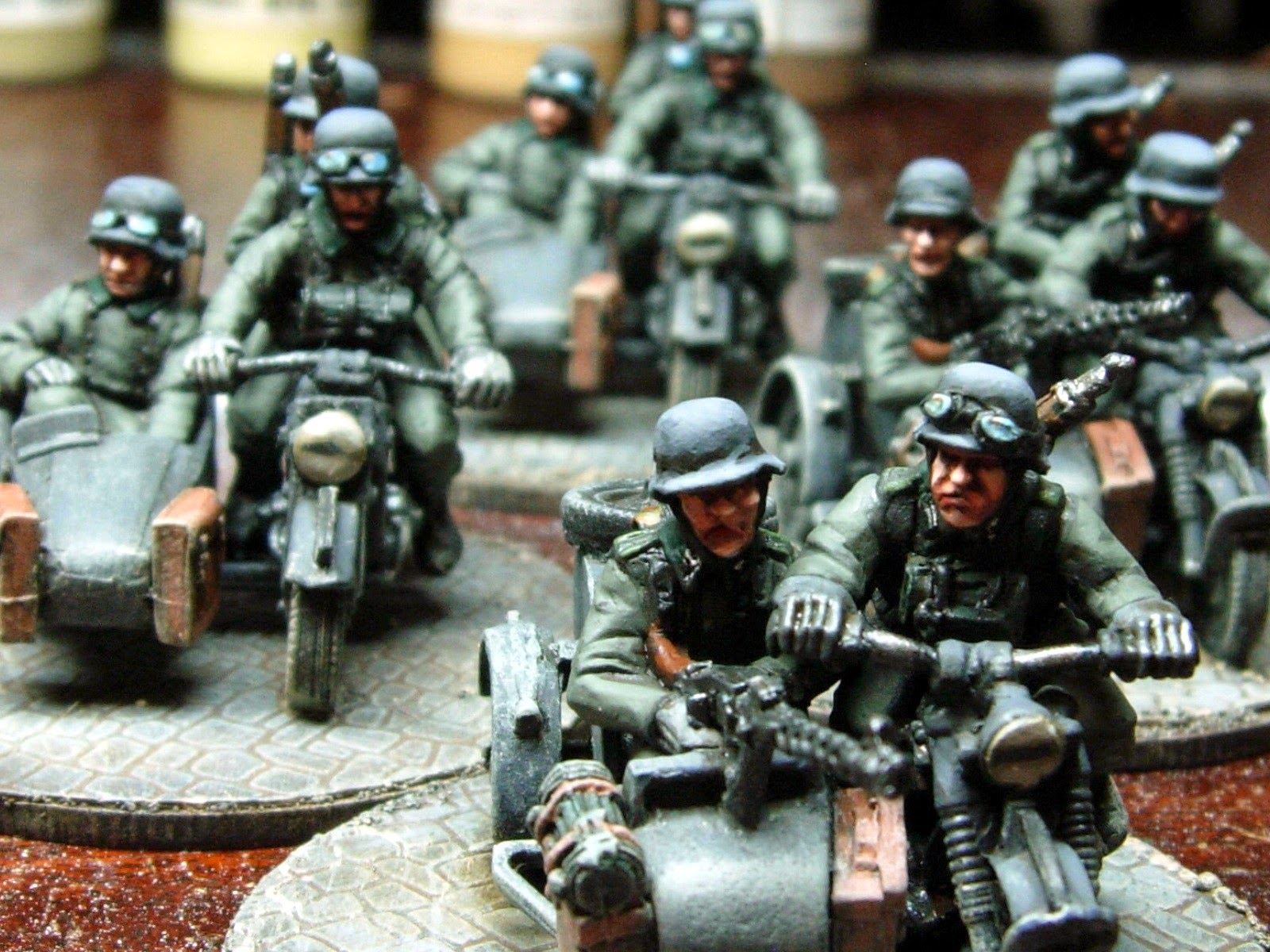 Not the usual style pictures today as I have had to take these pictures at my work bench and not at the games table. When the new table is made, I will set the scene for these and take a few action shots.

As you can see, here we have some 28mm WW2 German motorcycles with side-cars from Wargames Foundry and Warlord's Bolt Action range. In the picture below, the two bikes in the front are from Foundry and the two at the back are Warlord's. Both sets are a good match in scale and are a joy to paint. 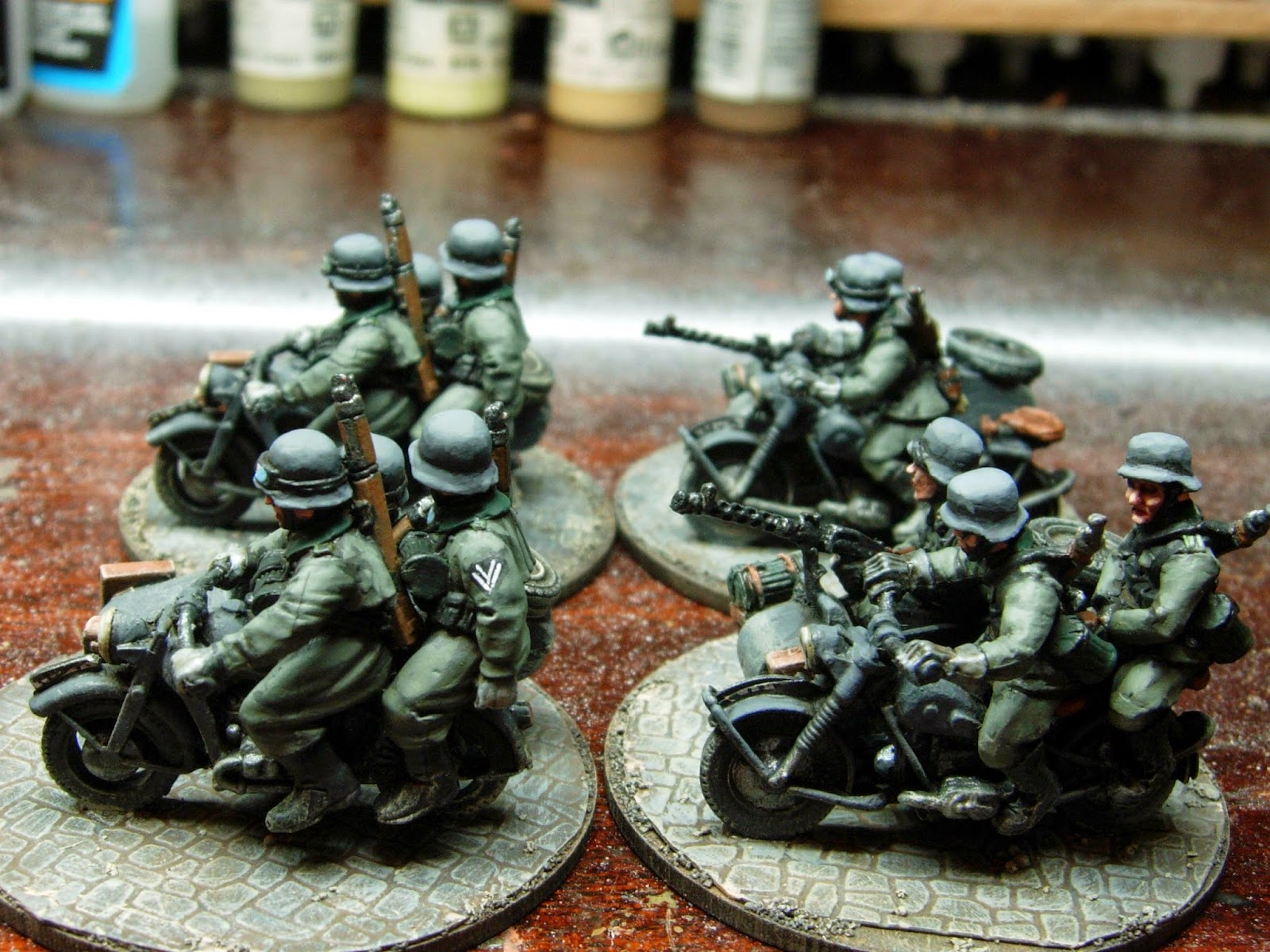 I have based them on 50mm round bases from Warbases.co.uk and glued some embossed plasticard down on top for a cobbled road effect.

For a reconnaissance squad (Aufklarungs Squad), I will only actually be needing three motorcycles with side-cars, one LMG with two crew on one machine and three riflemen each on the other two but I am sure the fourth bike will get used at some point. 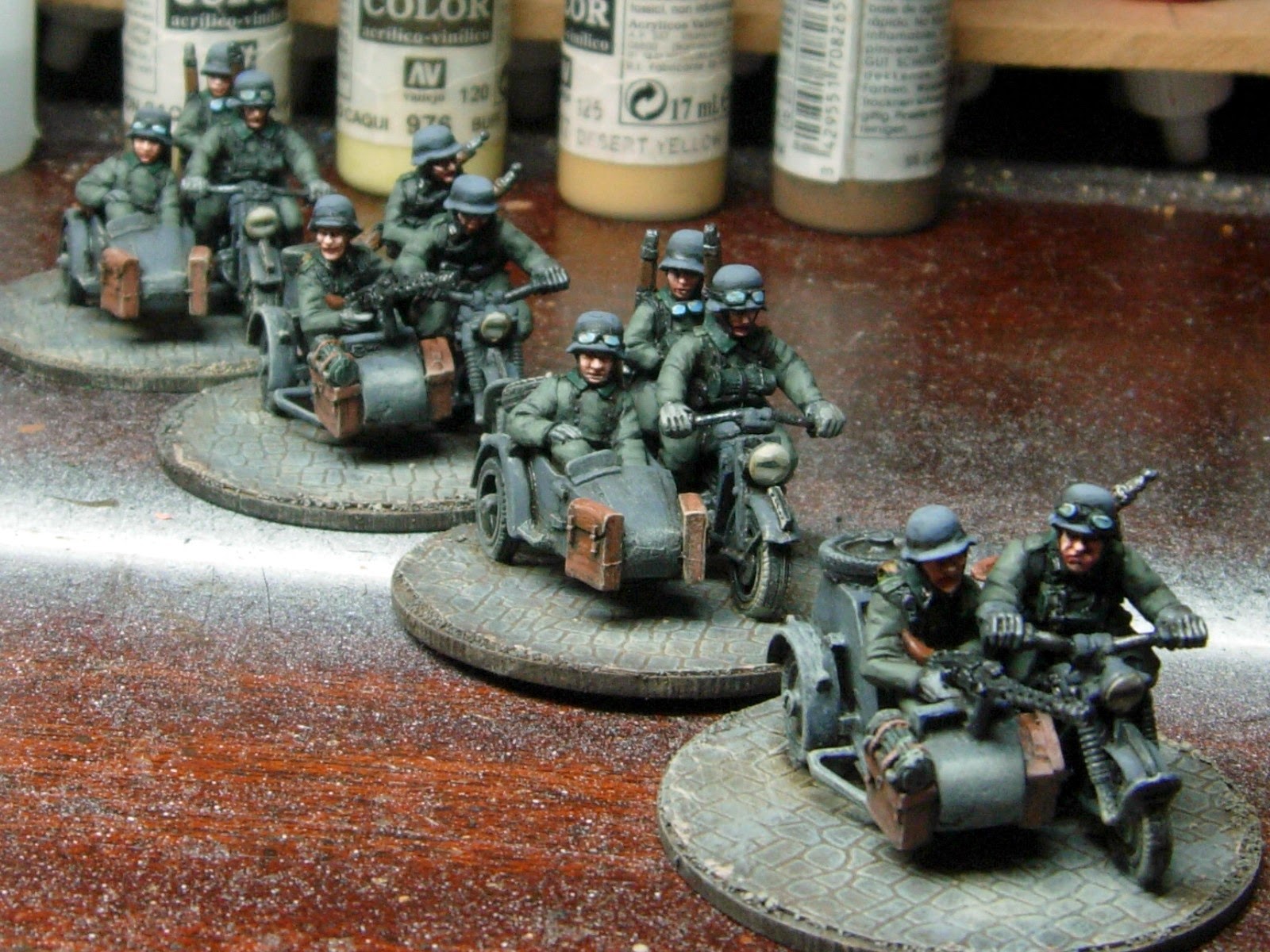 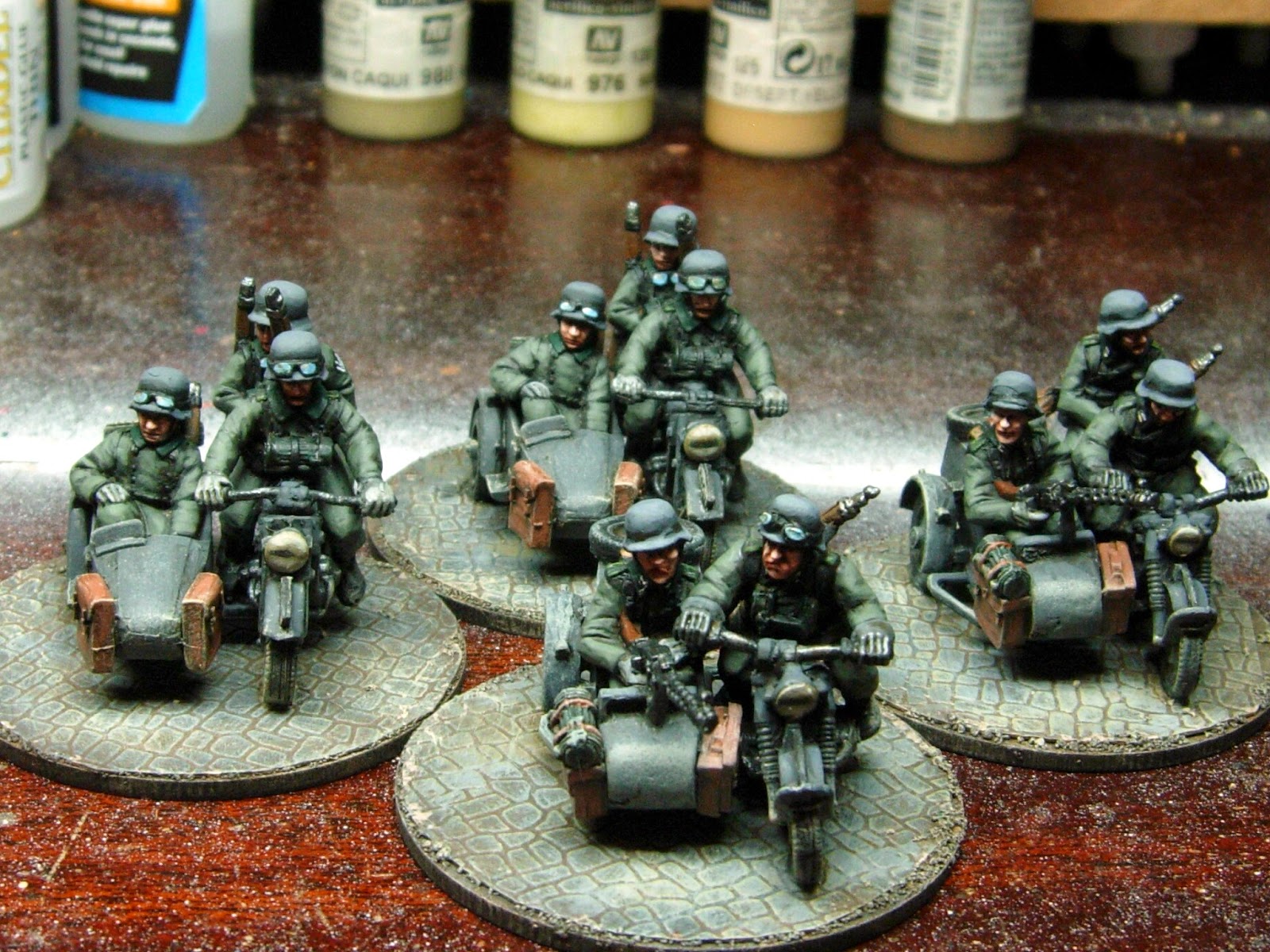 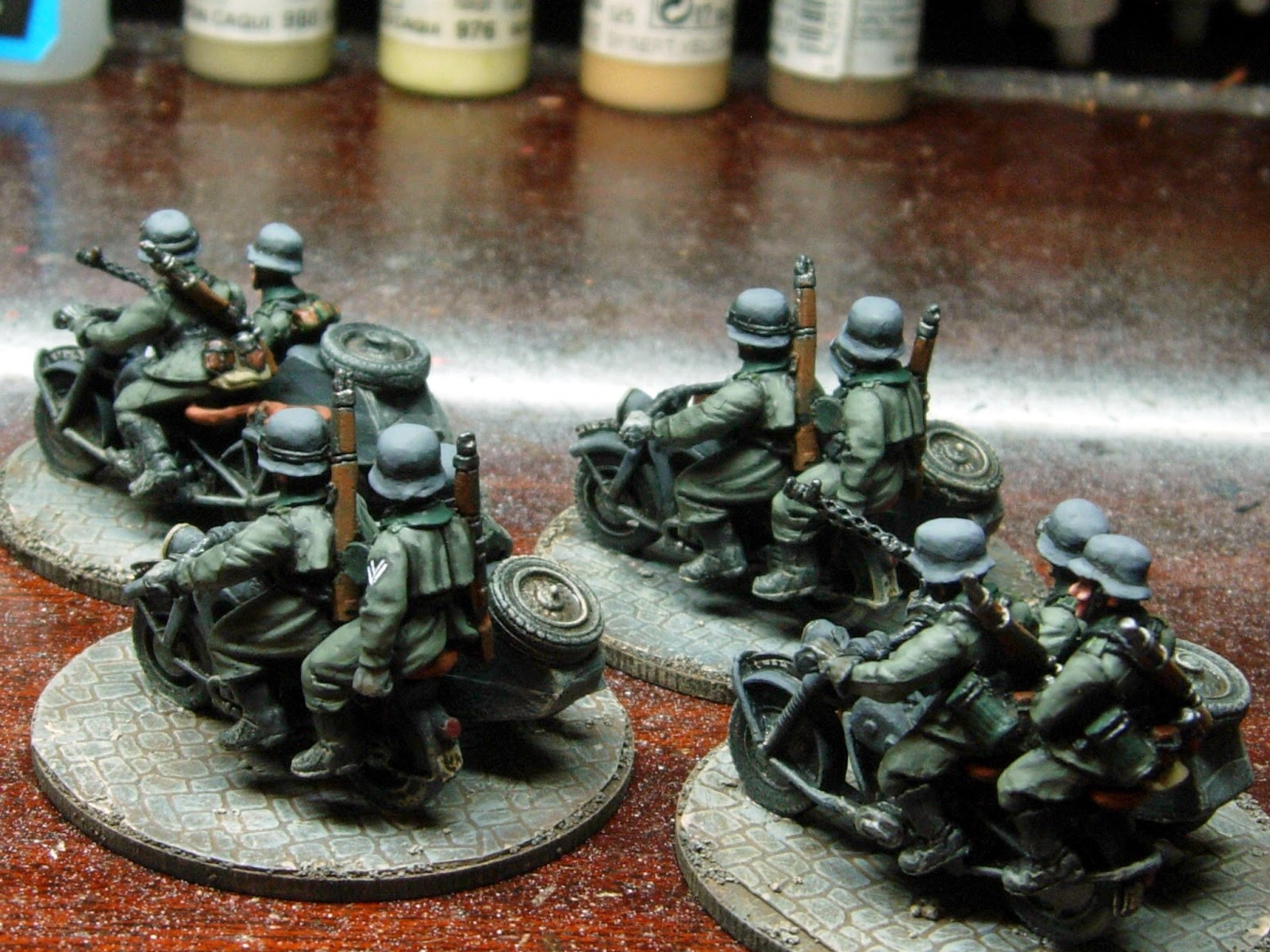 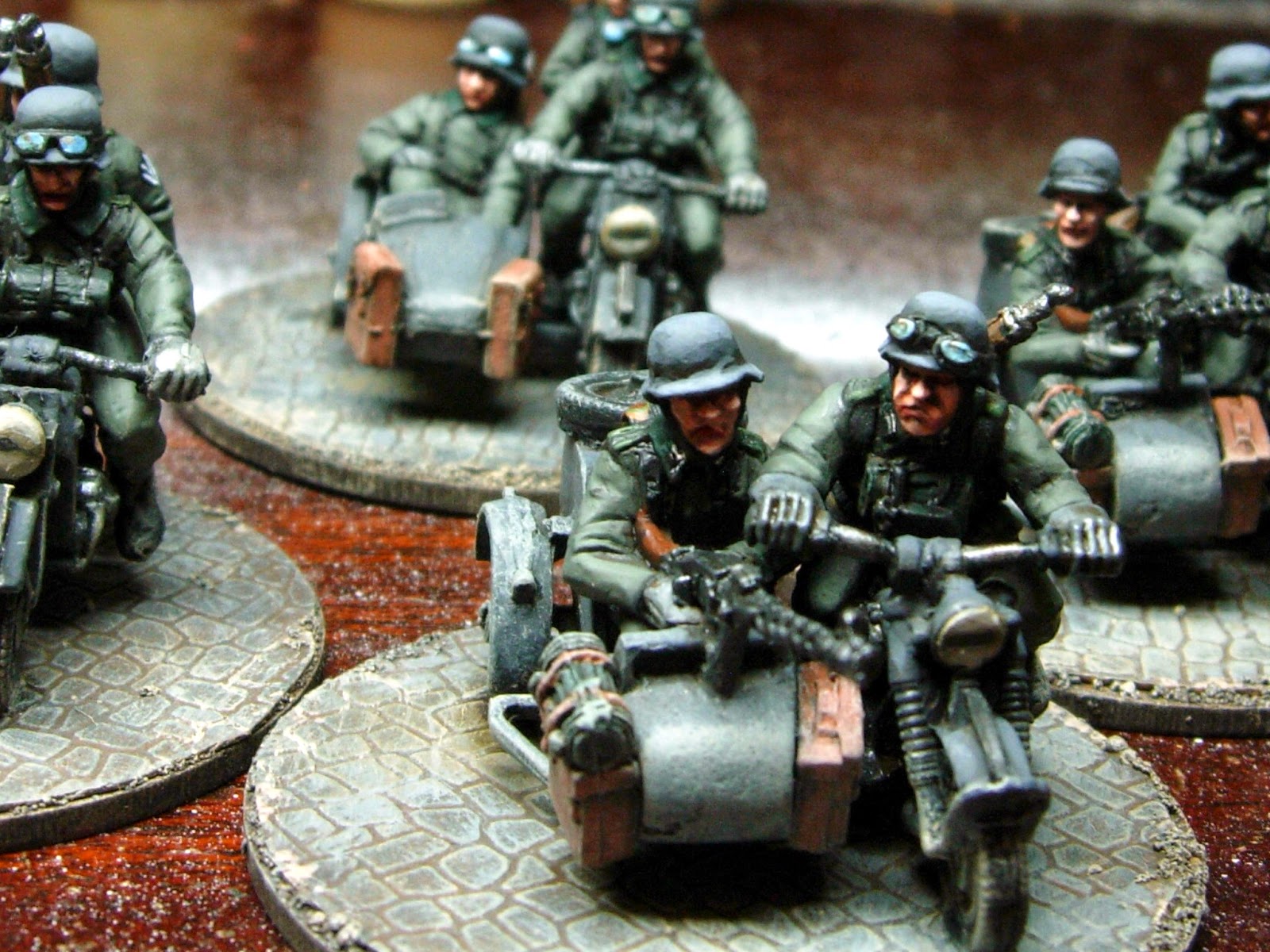 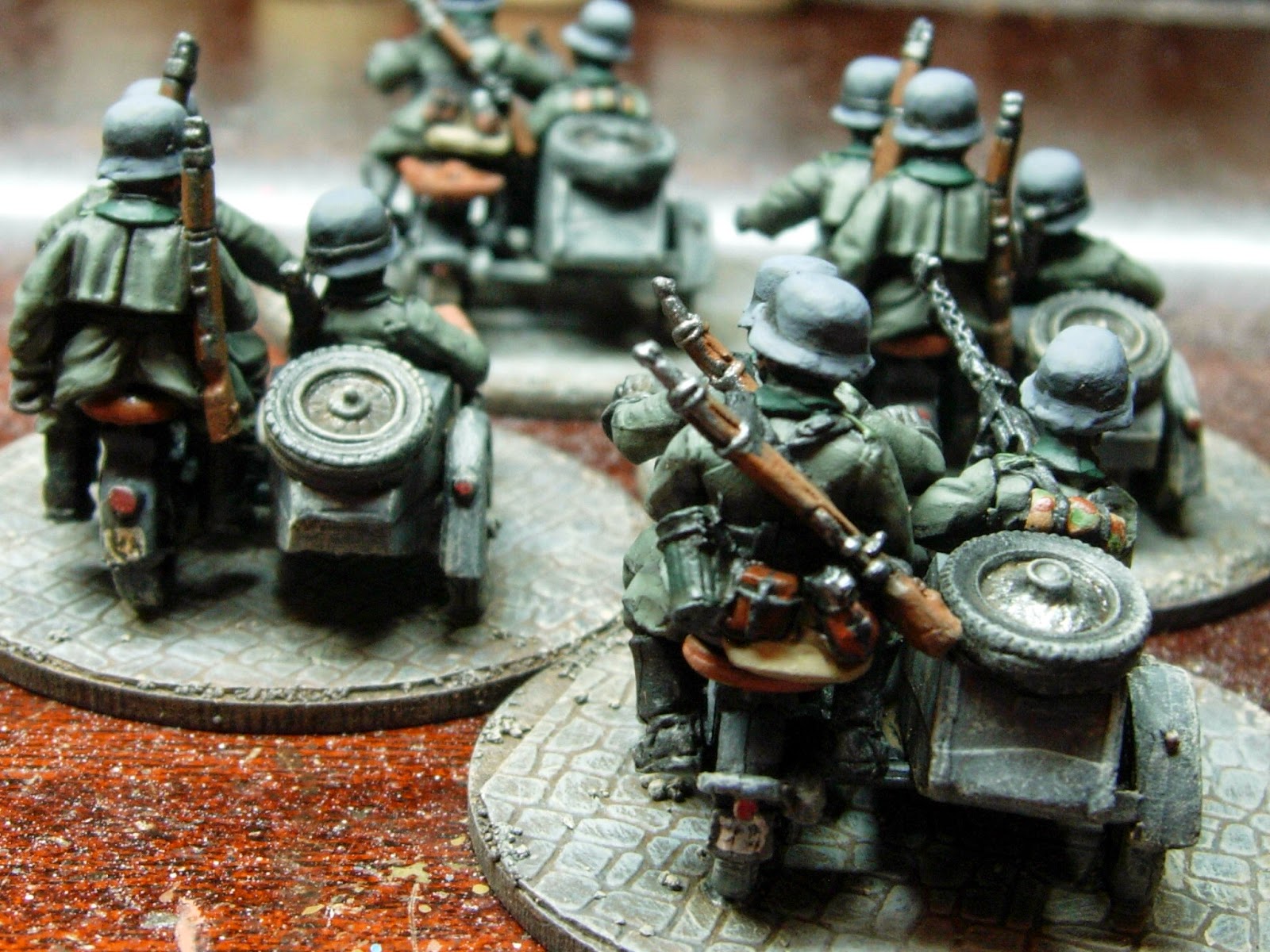 As I write this on a Saturday morning, the builder is in the garage building a new wall for my games room. Originally the garage was divided into two thirds game room, a wall and then one third for bike storage etc. 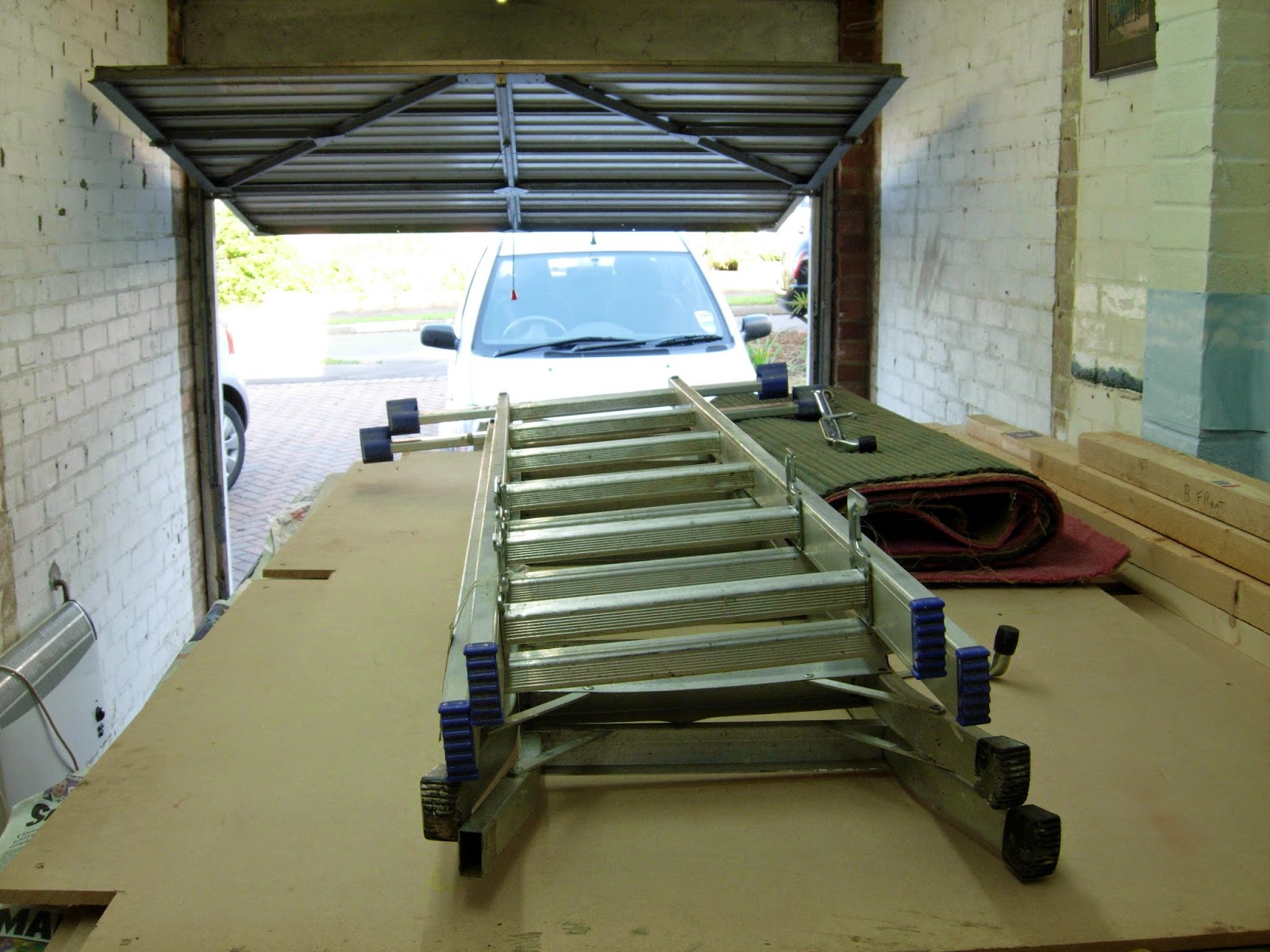 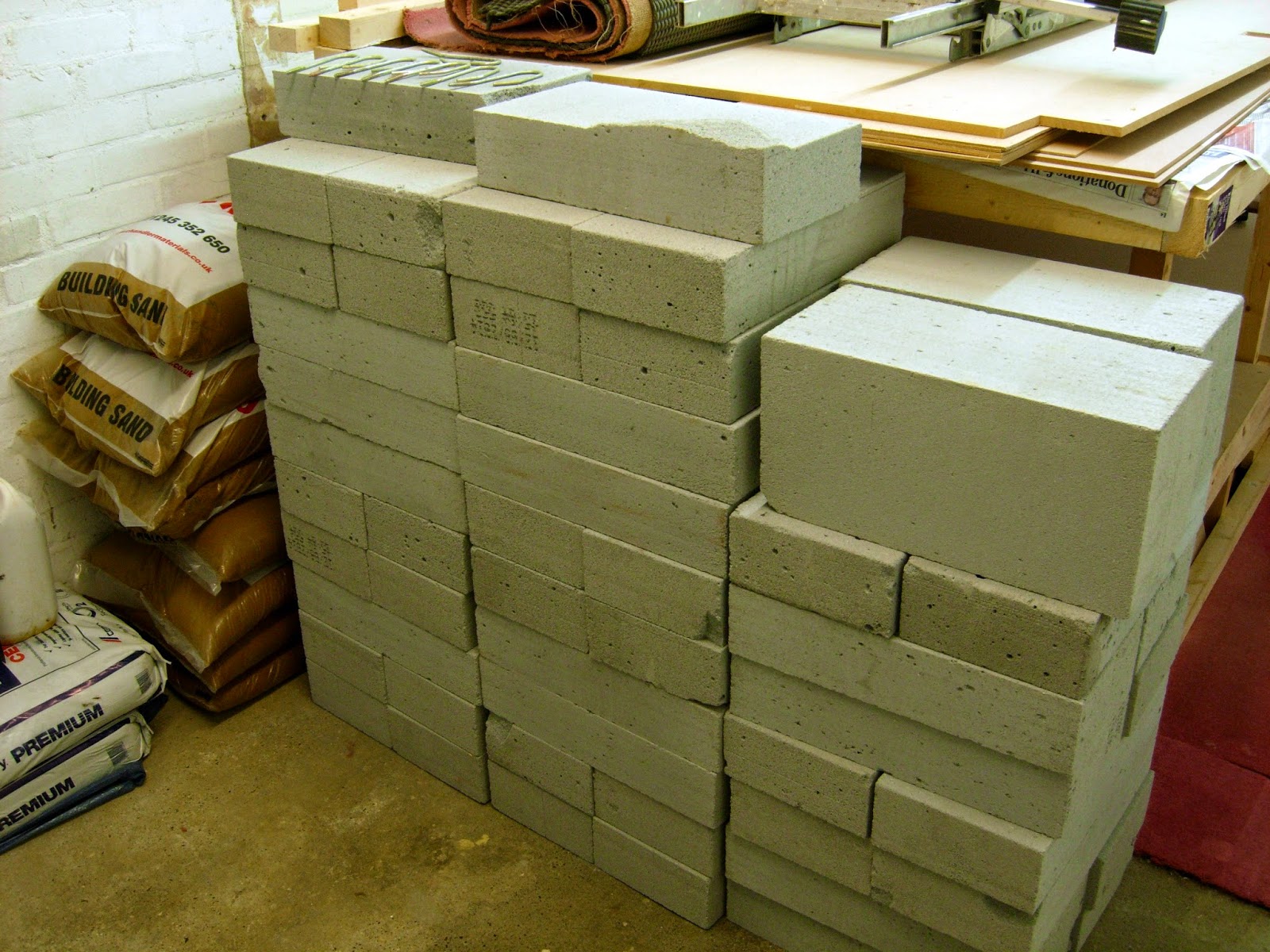 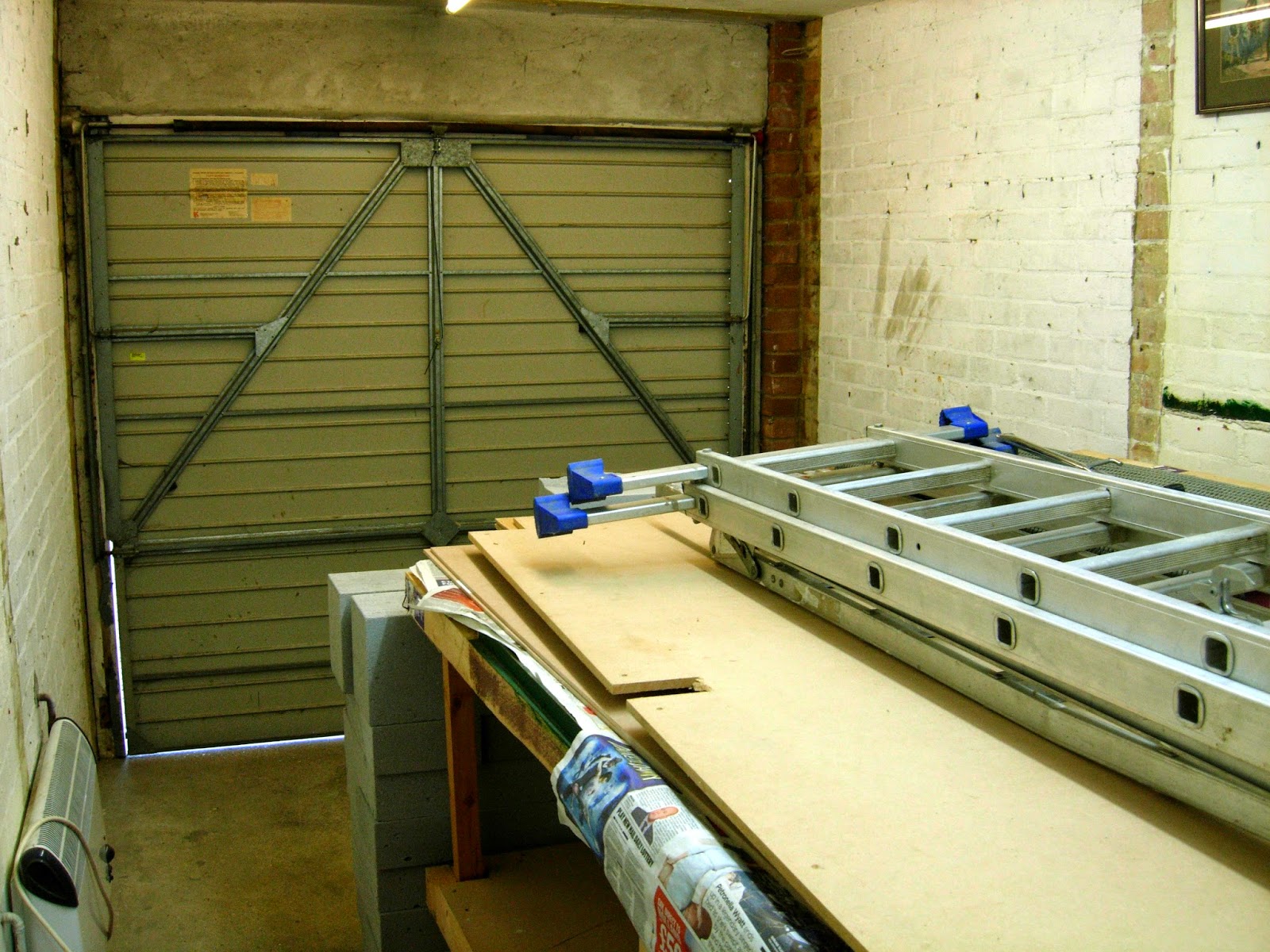 The original table with access to only three sides. 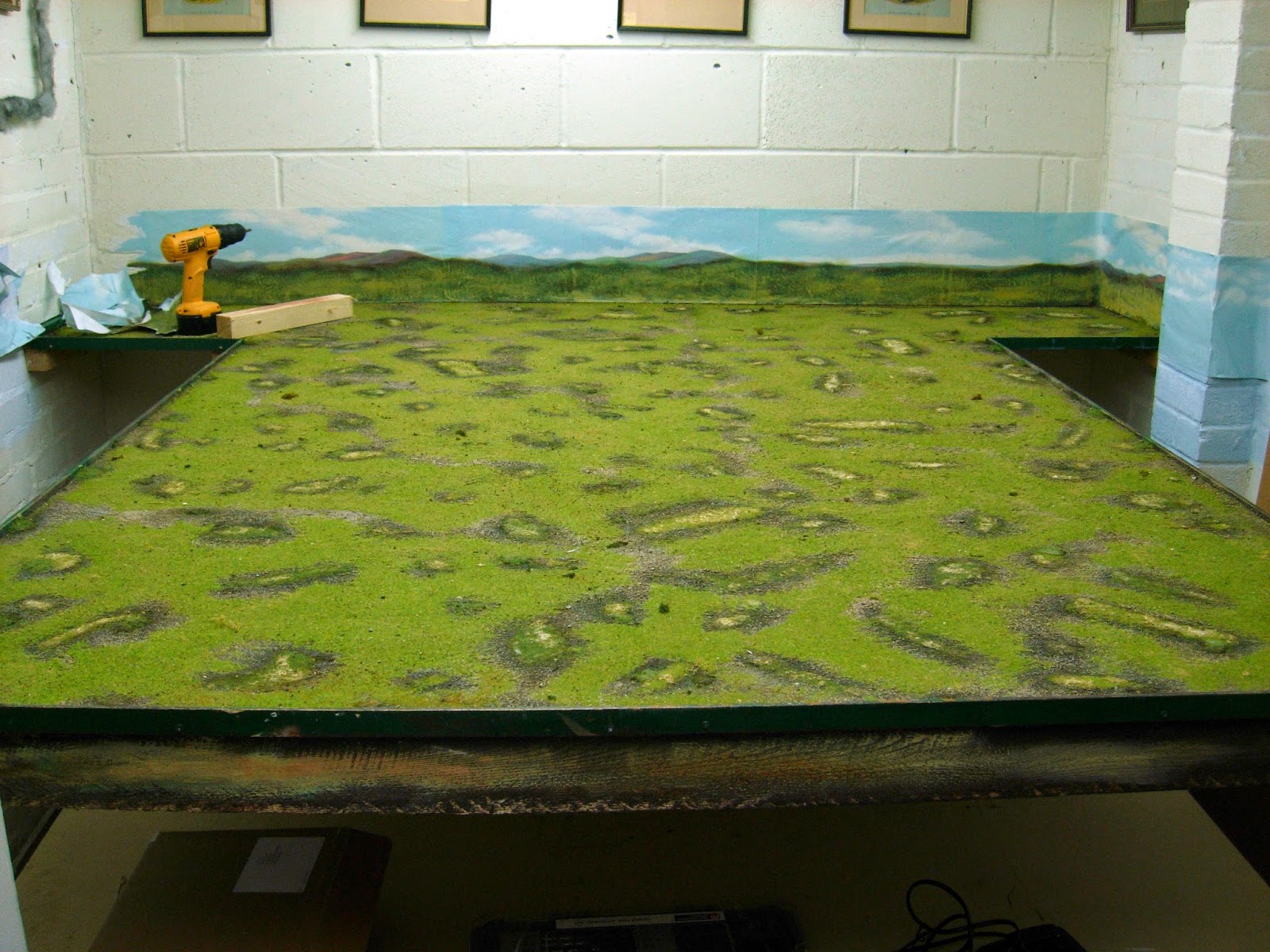 I originally built the table quite high for an extra level of storage but I have now been able to drop the height as I will be building extra storage along the new wall. 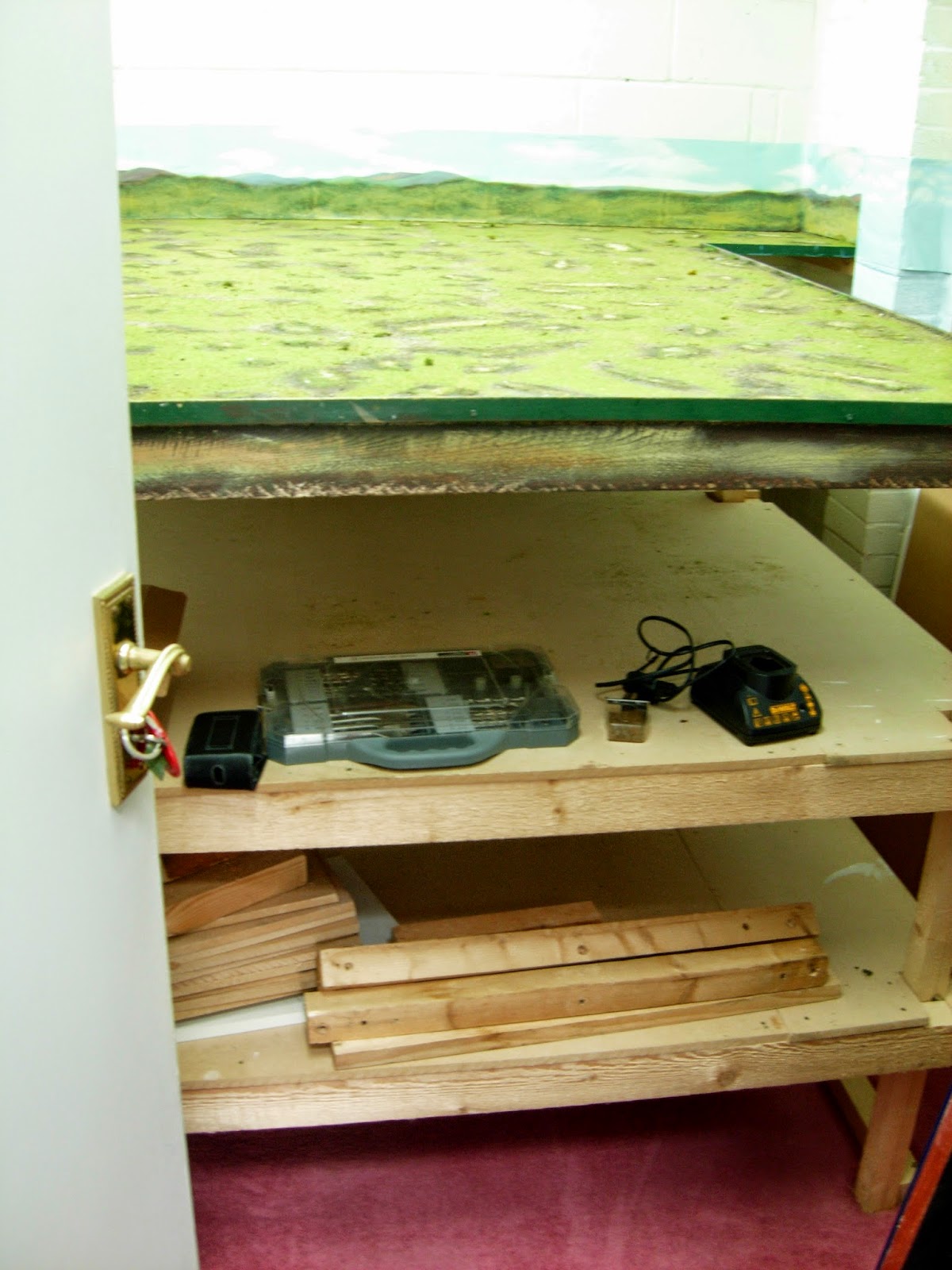 I will do a work in progress over the next couple of weeks as I put an extension on the new table and resurface it to match the existing table. I also have 40ft of some excellent new back drop which I will be fitting all the way around the walls. I will be fitting these with no corners but using curved back boards, and they are actual photo prints of overcast sky and 15 inch deep rather than the 9 inch coloured paper that I had before.
I will be fitting extra daylight tubes in the room and also plan on upgrading the actual look of the playing surface, so hopefully you will notice a big improvement in future posts.
Posted by Silver Whistle at 02:49